Alone in the crowd

Jingle bells from salvation army rose up the air,
happy people chattered by the road,
X mas tree lit in front of Rockefeller,
I walked along the fifth avenue
alone in the crowd.

Organ music playing loud in the church,
children dressed as angels roaming around,
people praying with renewed hopes,
I stood there in the church
alone in the crowd.

Christmas treats getting distributed,
candies, cookies and cakes,
chicken, ham and duck,
I sat near the table in the rectory
alone in the crowd.

Memories flooding inside me,
happy mask fading away,
could this be a bad dream?
How I wish I didn't want to be
alone in the crowd.

A solo traveller in the Himalayas

How do you fill the void when a highly anticipated Chile trip gets cancelled? You plan a trip to an equally exotic place! And, this is exactly what I did, except for the planning part. After surprising my parents who thought I was on a trip to Chile, I embarked on my trip to Bhutan. I cooked up a quick itinerary while waiting for my flight to Bagdogra from Cochin. I was in short of liquid cash, but I was hopeful of getting it from Delhi during my transit time. But little did I know about Modiji's plan for me. Delhi airport was out of cash for the previous three days. So, once I got down at Bagdogra, I had to stand in line at a local ATM. When I started the trip, I had pictured it as a soulful trip with the mighty Himalayas watching over me. But there I was, standing in a long queue to get money for my trip while warding off mosquitoes. (I shouldn't complain, Damn, those soldiers in Siachen) Once I got my money, it was already late, so I decided to get a hotel in Siliguri and travel to the border town Phuentsholing early in the morning. I made a deal with a local taxi driver to drive me to Phuentsholing around 5 am. This meant that I could reach Pheuntsholing by 8, right in time to get permit for my onward travel to Bhutan. 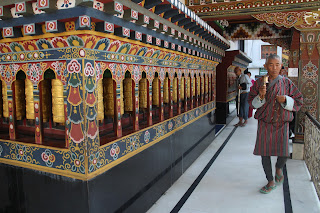 Early in the morning I left for Phuentsholing and I reached there by 8 am. There I met with two other solo travellers. Bala, who was travelling from Mumbai on his royal enfield offered to give me a lift to Paro, Bhutan. Since I had only very few days in my hand I had decided to visit Tiger's nest (Takstang) alone and then move to Gangtok. The bike ride to Paro was the highlight of Day 2. It felt like being in the sets of Kung fu panda movie. We halted at Paro and headed out for dinner.


Next day morning at 6, we left for Takstang (Tiger's nest). There was a Bhutanese family at the foothill of Takstang. They were going to the temple for prayers. Though we didn't speak each other's language, we both seemed to understand each other. Bala without his bullet was struggling with the trek and gave me a nod to walk at my own pace. I moved along with the Bhutanese family. At midway, I met with Darsha Sanghal who had left her acrophobic husband at the foothill to trek up the Takstang. We both talked about our adventures as we trekked up. We took almost 1.5 hours to reach the summit. Takstang is a group of 12 temples, but unfortunately photography is not allowed there. Our next destination was Thimphu, as we needed new permits to travel to the Phobjika in Bhutan. Though we managed to reached Thimphu to get permit, we needed additional permit for the bullet. Unfortunately the office was closed by the time we reached Thimphu and would open only at 9 next morning. This meant that I would have to waste close to 4 hours in Thimphu which I didn't think was worth while. So I decided to go back to Gangtok which was my initial plan. I reached Phuentsholing that night and stayed there. 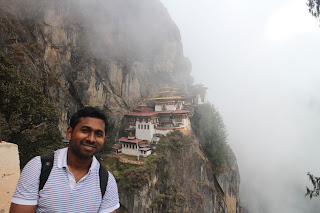 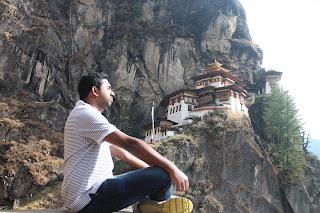 Next day morning, I took a bus to Siliguri. A strange thought of taking the Helicopter from Bagdogra to Gangtok hit me. I called them up to see if there were any seats available. Apparently seats get filled almost 6 months in advance in the four seated helicopter. Seats were not available for my return trip as well. Thus I took another Bus to Gangtok. I checked into a hotel in Gangtok and decided to roam around the city. The rope way in Gangtok was the only thing worth mentioning about Gangtok city. Next day I had my trip planned to Nathula pass. On this trip I met three other solo travelers. After Nathula we four decided to hangout. At this point I got a call from Pawan Hans helicopter telling me about a last minute cancellation and availability of a seat. I rushed to their office and got the tickets for next day and then we headed out to try out the local drink called Chaang. Thanks to Deependra, knowing the local language, we found a really shady place in Gangtok which served the local drink.

Next day morning Prasanth and I set out for a local site seeing. Our destination was Tashi view point, but the morning being cloudy we couldn't see Kanchenjunga from there. Our driver took us to Ganesh tok from where Kanchenjunga was clearly visible. After this we headed back to our hotel where I parted ways with Prasanth and left for the helipad.An epic trip was coming to close with my first ever Helicopter ride.

This happened to be the best solo trip I have ever taken. I met many interesting people, traveled using all possible means of commute from cycle rickshaw to helicopter and experienced different local cuisines and above all had a bunch of good memories to hold on to.


Tips for Bhutan/Gangtok travellers
1. Permit to travel to Paro and Thimphu is issued only on weekdays from Phentsholing.
2. Permit to travel to other places in Bhutan is issued from Thimphu and the office closes by 4 pm.
3. Make sure you get your permit stamped at each entry point.
3. Nathula pass is closed on Sat and Sundays.
Posted by febingeorge at 8:43 PM 2 comments: